Members of the Court

Statements by the President

How the Court Works

Organizational Chart of the Registry

Library of the Court

Charter of the United Nations

Statute of the Court

States entitled to appear before the Court

States not members of the United Nations parties to the Statute

Basis of the Court’s jurisdiction

Declarations recognizing the jurisdiction of the Court as compulsory

Presentations on the work of the Court

Series A/B: Collection of Judgments, Orders and Advisory Opinions (from 1931)

Series C: Acts and documents relating to Judgments and Advisory Opinions given by the Court / Pleadings, Oral Arguments and Documents

Series D: Acts and Documents concerning the organization of the Court 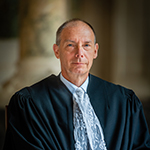 On 22 May 2019, Mr. Philippe Gautier, of Belgian nationality, was elected Registrar of the Court for a term of seven years, effective 1 August 2019.

The Registrar is elected by the Court for a term of seven years and may be re-elected (Rules, Art. 22).

The Registrar (Statute, Art. 21) is responsible for all departments and divisions of the Registry. Under Article 1 of the Instructions for the Registry, “[t]he staff are under his authority, and he alone is authorized to direct the work of the Registry, of which he is the Head”. In the discharge of his functions the Registrar reports to the Court. His role is threefold: judicial, diplomatic and administrative.

The Registrar’s judicial duties principally relate to the cases submitted to the Court. His tasks are as follows: (a) he keeps the General List of all cases and is responsible for recording documents in the case files; (b) he manages the proceedings in the cases; (c) he is present in person, or represented by the Deputy-Registrar, at meetings of the Court and of Chambers; he provides any assistance required and is responsible for the preparation of reports or minutes of such meetings; (d) he signs all judgments, advisory opinions and orders of the Court, as well as minutes; (e) he maintains relations with the parties to a case and has specific responsibility for the receipt and transmission of certain documents, most importantly applications and special agreements, as well as all written pleadings; (f) he is responsible for the translation, printing and publication of the Court’s judgments, advisory opinions and orders, the pleadings, written statements and minutes of the public sittings in every case, and of any other documents that the Court may direct to be published; and (g) he has custody of the seals and stamps of the Court, the archives of the Court, and any other archives entrusted to the Court (including the archives of the Permanent Court of International Justice and of the Nuremberg International Military Tribunal).

The Registrar’s diplomatic duties are as follows: (a) he attends to the Court’s external relations and acts as the channel of communication to and from the Court; (b) he manages external correspondence, including that relating to cases, and is available for consultation if required; (c) he manages relations of a diplomatic nature, in particular with the organs and Members States of the United Nations, with other international organizations and with the government of the country in which the Court has its seat; (d) he maintains relations with the local authorities and press; and (e) he is responsible for issuing information about the Court’s activities and for the Court’s publications, including press releases.

The Registrar’s administrative duties include: (a) the internal administration of the Registry itself; (b) the Court's financial management, in accordance with the financial procedures of the United Nations, and in particular preparing and implementing the budget; (c) the supervision of all administrative tasks including printing; and (d) making arrangements for such provision or verification of translations and interpretations into the Court’s two official languages (English and French) as the Court may require.

Pursuant to the Exchange of Letters between the President of the International Court of Justice and the Minister of Foreign Affairs of the Netherlands, and General Assembly Resolution 90 (I), the Registrar is accorded the same privileges and immunities as Heads of Diplomatic Missions in The Hague and, on journeys to third States, all the privileges, immunities and facilities granted to diplomatic envoys.

On 22 May 2019, Mr. Philippe Gautier, of Belgian nationality, was elected Registrar of the Court for a term of seven years, effective 1 August 2019.

The Deputy-Registrar of the Court is Mr. Jean-Pelé Fomété, of Cameroonian nationality. He was first elected to the post on 11 February 2013 for a term of seven years. On 20 February 2020, Mr. Fomété was re-elected for a second term of office as from 1 April 2020.

The names of the former Registrars are listed below :

The names of the former Deputy-Registrars are listed below :